Tenkara is a century’s old style of fishing from the mountains of Japan. It uses a simple rod with a line attached to the tip of the rod and a fly on the end. no reel to fight the fish on, just the bend of the rod. best suited to smaller backcountry fish or larger fish in waters that allow you to follow the fish from the bank. What started out as a 12′ bamboo rod is now a 20″ telescopic graphite rod that extends to 12′ perfect for the sierra backcountry. Kittredge Sports is a Tenkara USA Dealer. 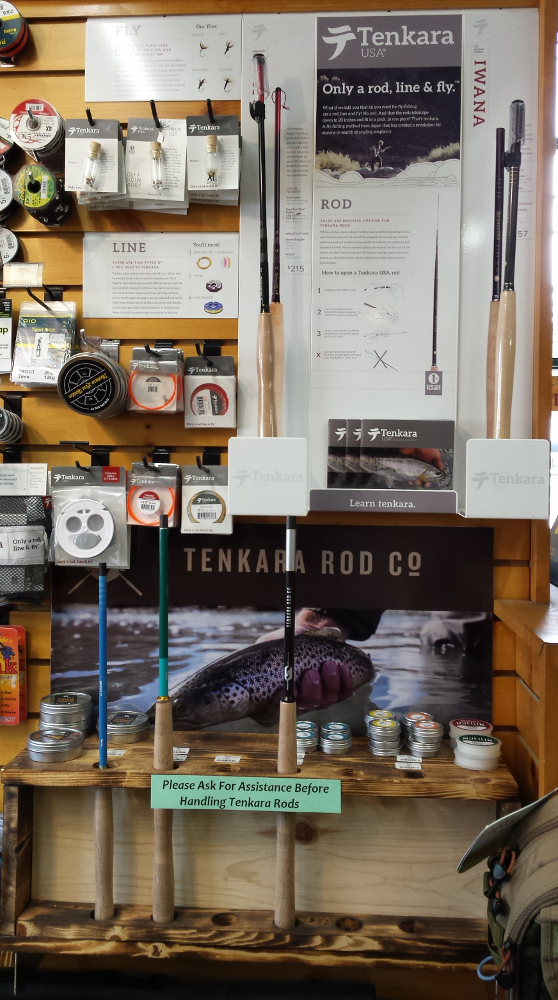 Tenkara USA is the first company to introduce tenkara outside of Japan. Founded in 2009 by Daniel W. Galhardo, Tenkara USA is a fully independent company, based in Boulder, Colorado.

In 2007, Daniel discovered tenkara while researching the history and culture of fishing in Japan. In 2008, he visited Japan for his first time with his wife and saw tenkara in person. He returned to the US with a tenkara rod in his bag and started enjoying tenkara on backpacking trips. The method was simple and effective; yet, there was no information in English on tenkara. Daniel decided he wanted to share tenkara with people, it would make it easy for people to take-up fly-fishing and experienced anglers like himself were sure to enjoy its minimalist nature. He realized that to share tenkara he could have written many articles and books about it, but if people didn’t get a chance to experience tenkara for themselves it would not spread. Thus, Daniel set out to create a business designing tenkara rods, tenkara lines and tenkara flies and putting them in the hands of people.

In March of 2009, after several months of hard work creating the business and a month before Tenkara USA officially “opened doors”, Daniel left his nascent career in international banking to dedicate himself full-time to creating Tenkara USA. There were many challenges ahead with introducing a type of fishing that doesn’t target the largest fish around and went against the grain of the established industry.

Tenkara has been called a fad, and was initially dismissed by the industry. But, it’s probably not an exaggeration to say that tenkara has since created a small revolution in the fly-fishing industry.

They are based out of Driggs, Idaho and are proud of their location and surroundings. Within 1 hour of their headquarters they have some of the world’s best trout rivers and streams (but don’t tell anybody that). Idaho’s geography has inspired this hobby as well as the design and functionality of their rods. You don’t have to live somewhere like Driggs to enjoy Tenkara. You just need to be able to find some water to throw your line in!

Why They Do What They Do

They love the outdoors as well as the simplicity and beauty nature has to offer. Fishing gives people a chance to get out and and enjoy this beauty. The complexity and expense of fly fishing can be daunting to someone who just wants to throw a line and catch some fish. Tenkara gives people this opportunity. With a rod, a line, and a fly, you can go to a river, lake, or stream and catch some fish. That’s what made them fall in love with the sport.
http://www.tenkarausa.com/learn-tenkara/